Altar to an Unknown Love: Rob Bell, C.S. Lewis, and the Legacy of the Art and Thought of Man 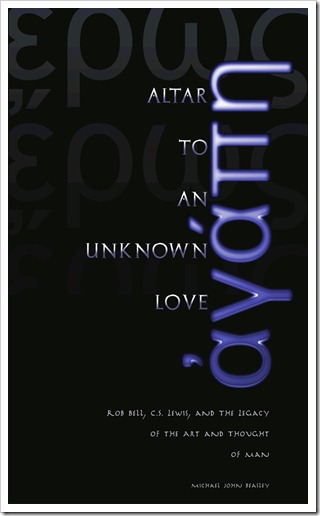 eBook and paperback - available at amazon.com - For more information go to: ataul.thearmoury.org

For centuries, the world of professing Christendom has faced countless contests regarding the nature of God's justice and love, as well as the doctrines of Heaven and Hell. Rob Bell's book, Love Wins, is just another illustration of this reality. The entire protest revolving around Bell's book was fairly dramatic, however, it produced more smoke and heat than productive light. Despite the loud complaints leveled against the controversial author of Love Wins, what he unveiled in his book should have produced little surprise. There is a very important and untold story behind the whole Bell debate that must be passed on for the sake of future generations. The mystery and oddity of this conflict has revealed a systemic problem - one that is much greater than the premature protests surrounding Rob Bell. Altar to an Unknown Love addresses the untold story which stands behind the scenes of Bell's particular views of theology. What the reader may find surprising is that Bell's teachings are remarkably familiar, and have even been promoted, whether directly or indirectly, by some of Bell's loudest critics. All of this points to a great opportunity for the church in the present day. The conflict surrounding Rob Bell actually supplies an opportunity to rediscover our need to go back to the Scriptures themselves, rather than to the teachings and traditions of men. This is an opportunity for the church to rediscover the priority of Sola Scriptura, now, and for the generations to come.

The last year has seen major controversy in the United States over Rob Bell’s Love Wins, A Book About Heaven, Hell and the Fate of Every Person who Ever Lived. Interest in that book is now passing, but before it does so, Michael Beasley believes there is a wider issue that ought to be addressed. Bell’s thinking, he notes, has been condemned by evangelicals who are, at the same time, professed admirers of authors from whom Bell has drawn, namely, George MacDonald and C. S. Lewis. Beasley challenges the consistency of this procedure, and if his book is taken seriously—as it deserves to be—it must promote more controversy, for MacDonald and Lewis are widely respected figures. Lewis is virtually an icon of American evangelicalism; on one occasion the readers of Christianity Today rated him as the most influential writer in their lives. But the only dependable foundation for Christian belief is missing in Lewis. He does not believe in the inerrancy of Scripture, with the result that his conclusions are a conglomerate of Bible, imagination, and philosophy. Does the absence of that foundation matter when it comes to understanding the love of God—the subject with which Beasley’s book is primarily concerned? From Acts 17, the Athenians’ worship ‘To An Unknown God’, Beasley shows that the saving knowledge of God is only known by divine revelation. Lost man is as ignorant of that knowledge as were the Athenians. Yet, instead of starting with Scripture, Lewis believed that a consideration of love in man can help us to understand love in God. A major part of Altar to an Unknown Love is a refutation of this error. The love to be found in unregenerate man is self-love— love centering around the pursuit of pleasure, and identified by the Greeks (and by Lewis) as eros. But the love of God (never called eros in the NT) is altogether different, and is unknown until a person is born of God (1 John 4:7-10). ‘Those who do not know God cannot know his love’ (p. 52). ‘Without understanding the nature of his love . . . we are left with nothing but our own shifting sands of human affection’ (p. 39).

A reconstructed presentation of the love of God—to be found in all the authors Beasley is critiquing— produces teaching which carries no offence to the natural man. What is more offensive to the natural man than truth concerning the justice of God and his wrath against sin? But that offence is eliminated by the subjective, man-centered teaching here reviewed. The love of God is such, it is said, that it requires him to respect human freedom, and that freedom should control how we think of heaven and hell. ‘The damned’, wrote Lewis’ publisher of The Great Divorce (Macmillan Publishing, 1976), ‘are under no obligation to return to hell. They can stay on in heaven if they wish—if they are willing to forgo their most precious sins’ (p. 86). Or as Lewis said, ‘The doors of hell are locked on the inside’ (p. 89n). ‘We get what we want’, says Bell. ‘God is that loving. If we want isolation, despair, and the right to be our own god, God graciously grants us that option . . . God says yes, we can have what we want, because love wins’ (pp. 85, 122). So it is not justice but love that takes anyone to hell. The divine love, which is claimed to be subordinate to human freedom, leads to men being given what they want. Heaven and hell revolve around man, not God (p. 81).

This thinking does not simply take away the offence of biblical truth; ultimately it takes away the gospel itself. For if God’s determination to judge and punish sin is no part of his character, then a substitutionary atonement ceases to be a part of the Christian message. It is not accidental that none of the authors Beasley is examining believed that in the shedding of his blood Christ was bearing the penalty of sin. The author points out correctly that C. S. Lewis did not belong to evangelical circles in Britain in his lifetime. To our mind he proves the case that Lewis is now so widely acceptable in American evangelicalism because non-biblical ideas are not being recognized for what they are. Artistry in writing, effective story-telling, with a mixture of ‘disconnected scriptural references and thoughts’, are able to achieve wide success in a day when discrimination has given way to popular appeal. These are all characteristics of the writings of Bell, Lewis, and MacDonald. This is not to say that all they wrote is equally deserving of condemnation. Beasley’s strictures on Bell’s Love Wins are rightly the most severe (pp. 114-15). Lewis’s The Chronicles of Narnia, now produced on film by Disney for the millions, is not in the same category, but when ‘more and more preachers are eager to cite Lewis in support of their theological positions’ the warning contained in this book is not unfounded. It raises issues of fundamental importance.

Michael Beasley, a science graduate of California State University, and of the Master’s Seminary, has served in pastoral ministry since 1994. We are impressed and thankful for the character of his writings. His valuable book, Indeed, has Paul Really Said? A Critique of N.T.Wright’s Teaching on Justification, has already been reviewed in these columns.

Rob Bell, Love Wins, and the book: Altar to an Unknown Love from The Armoury Ministries on Vimeo.